The age of Growth Suite is here 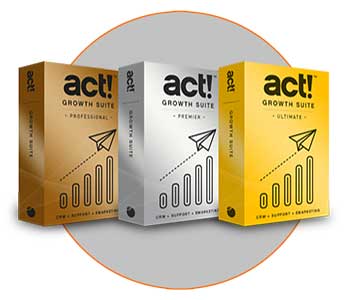 We knew it was coming, but we didn't expect the changes to be this big or the combined savings to be this good.

Starting today (May 1st), Swiftpage will announce the launch of Act! Growth Suite 2.0 as part of the Spring release of Act! 21.1, and usher in a new era for the Act! product line. Act! 21.1 is the latest major patch to Act! and includes many new Admin and End-user feature improvements, as well as a number of important bug fixes.

As great as these new features are, the real story is Growth Suite 2.0, and the four major changes it will introduce to the Act! product line.

The first major change everyone will notice with Growth Suite 2.0 is the new tier names. The old Act! Marketing Automation tiers of Select, Complete, and Advanced will give way to Growth Suite "Professional", "Premier", and "Ultimate", with each tier including one free license of Act!, support, and AMA. For clarity, not only will the old tiers cease to exist come May, AMA will no longer be available as a standalone product for existing Act! users.

This is a good change because now customers have a choice.

Since November, AMA could only be added to an existing Act! subscription account as an upgrade, with the initial AMA term being aligned with that subscription. This process allowed the subscriber to start using AMA at a smaller prorated amount, and thereby reduce the barrier to entry, but it also reduced their potential savings. As the promotional discounts of 10-25% were being offered on the first year, only the prorated amount got discounted, meaning new customers got much less than 12-months of savings.

Another improvement being introduced with Growth Suite 2.0 is the addition of features like "asset management" and "marketing calendar" to all three tiers of AMA, along with an upgrade of the Complete Tier, now known as "Premier", to include of the Advanced HTML editor that was previously an exclusive benefit of the Advanced or Ultimate tier.
The Advanced HTML feature allows users to import HTML files from external sources, and use sales templates with their campaigns.

The second major change people will notice is the naming conventions for these new tiers, as they sound eerily similar to the current Swiftpage support packages. This is by design. The new tier names reflect the fact that as you upgrade up the tier levels, so does the level of support you receive.

Your can learn more about the existing Swiftpage support tiers HERE.

The third major change is the inclusion of a free license of Act!.

That's right, without changing the price of AMA, Swiftpage is now including upgraded support packages AND the first Act! license at no extra charge. This is a major change in product bundling, as AMA is no longer being presented as an upgrade, but rather an integral part of the Act! eco-system. Remember, Swiftpage started off as an emarketing company, so it's not surprising that they'd return to their roots with AMA, and wed both CRM, support, and Marketing Automation together to form their new flagship offering known as Growth Suite.

Make no mistake, this new bundling will be at the core of how Act! evolves to better serve customers in the future.

New Pricing Model
Come May 1st, Growth Suite 2.0 will include all the features of Act! Marketing Automation, bundled with hundreds of dollars of new licensing & support benefits at no extra cost, so let's do the math.

A higher sticker price, at a lower over all cost
For those only familiar with emarketing pricing, the AMA costs may seem substantially higher, but consider this:

The fourth major change being introduced with Growth Suite 2.0 is the difference in deployment options between existing and new Act! subscribers.

The price for adding new users to Act! Premium Cloud will remain the same for both new and existing subscribers, which is $35/user/month ($420 annually). Existing Act! subscribers, though, will also have the option to save money by self-hosting their Act! software, and add more users at the preferred rate of $25/user/month ($300 annually).

Starting May 1st, this self-hosting discount will cease to be available to new Act! subscribers.

To be clear, new subscribers will have the same deployment options as before, but they can no longer get a discount for self-hosting their Act! software, meaning each additional user will cost them $35/user/month ($420 annually) regardless of how the software is deployed.

The reason for this "deployment agnostic" pricing strategy is Swiftpage strongly believes Act! Premium Cloud is the best customer experience for both CRM & AMA, and it's what new customers want most. In fact, the numbers show the vast majority of new Act! customers being provisioned onto Act! Premium Cloud vs self-hosting, and Swiftpage investments reflect this preference, as well. Accordingly, it does not make sense for them to invest most of their development resources into improving the Cloud platform for new customers, while continuing to offer them discounts for not using it.

And while new users will pay a bit more, Swiftpage has partnered with Starfish ETL to offer a free migration service to assist new customers for migrating their data over from other CRM products.

Summary
Growth Suite 2.0 is the single biggest change in the Act! product line in recent memory, and marks a dramatic change in direction for the publisher. Swiftpage is moving towards Act! being not simply a CRM, but an eco-system of services designed to help businesses grow, and in our opinion, the Growth Suite is a homerun - a no-compromise marketing technology combined with a CRM solution that has been trusted by millions for over 30 years. 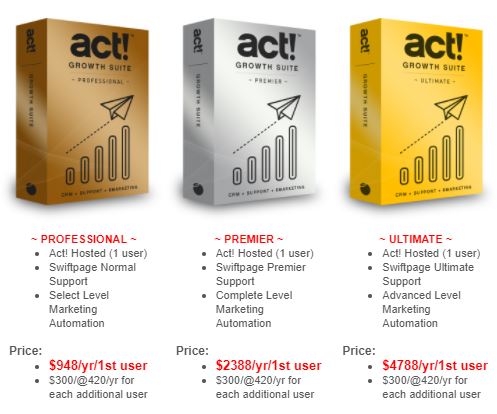